Photos of the Pink Stamp Special while it was racing in 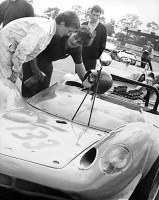 In and About – Photos from trackside and in the pits. 9 photos. 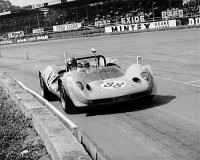 On Track – Photos of the car in action! 5 photos.

2002 Portland Historic Races Preparation– Photos from the many hours of putting the The Pink Stamps Special together for the Historic Races. 61 photos.

2002 Portland Historic Races – Friday The Pink Stamps Special returns to the racetrack for the first time in nearly 30 years! Kirk Keyes at the wheel. 48 photos.

Heine Lindeström has sent us some photos that his cousin Magne Sjöström took in 1967 of a Lotus 30 Coupe. The coupe is based on Lotus 30/L/16. Heine is currently working on tracking down more information on this car.

Photos from the 2002 Goodwood Revival.