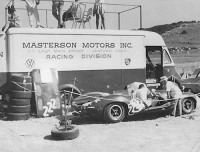 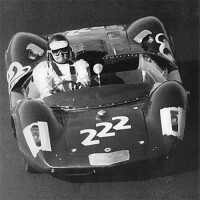 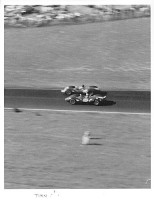 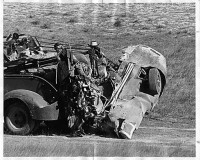 All Photos courtesy of John Masterson

John “Bat” Masterson was a popular Southern California racer and a member of the family that ran Masterson Motors, a VW/Porsche dealership in Ventura, CA.

These photos were taken at the Monterey Grand Prix at Laguna Seca on the following weekend, 18 Oct 1964. Unfortunately, John’s car spun out of control and crashed during practice for the race. John was seriously injured, but recovered fully.

John doesn’t remember much of what happened that day,

“Sunday is a day that I don’t remember.  Oh, I remember having waffles, bacon and eggs for breakfast, that the famous foggy mist of Monterey was heavy when we arrived at the pits but really, everything from then on is what someone has told me.  I am completely blank.  This is what supposedly happened.  Morning qualifying was the last chance to get into the afternoon event.  As I had not qualified earlier, I had to put the pedal to the metal.  Supposedly, after leaving turn 4 (old Laguna Seca configuration) I was hot on the loud pedal heading under the bridge towards #5.  A car (Lotus 23?) ahead of me had blown its engine and I hit the oil at 80-90 mph.  I lost it, tried to correct it but instead ended up hitting the concrete bridge.  It totaled the car and me.  My wife was back in the pits anxiously awaiting word.  The amazing thing was the car didn’t catch fire.  If it had, I would be crisper than the mornings bacon.  Evidently I was drenched in fuel being that the driver is surrounded by fuel tanks.  Remember this is 60’s non-safety regulations.  A good friend, Jerry Titus, offered to drive my wife to hospital in his BMW 2002.  She was told that I was dead or soon would be.  Months later, she told me that that short drive was the longest ride she NEVER wants to take again.  In fact, she refused to going racing with me afterwards, saying “Just have them call me when they know your true condition.”  I remember coming around to reality the following Thursday.  Funny to say, but one of the first faces I remember seeing was my banker.  He professed concern over my health but I am sure he was worried about the loan.  Seemed the papers weren’t totally legal as the President of the corporation hadn’t signed on the loan.  (much later, I signed up making me, not the Corporation, the one responsible for the $12,000.)  My parents showed up about the same time.  They were vacationing in Arizona and read the headlines about my accident.  There are two ways to be a headliner.  I don’t recommend this way.  Anyway, they drove to Monterey immediately as the reports were very negative.  Really, all I ended up with were broken ribs, concussion and bruised heart.  My first question when I came out of the ether?  “How’s the 30?”  My thoughts? “Twelve grand in debt, no furniture and my credit shut off in the parts department.  Where am I going to get my next race car?”