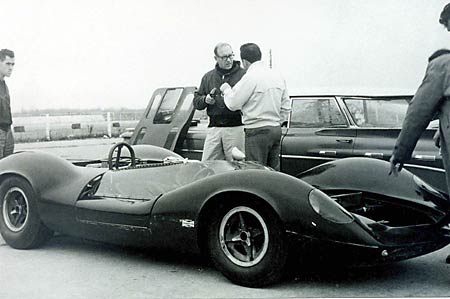 According to the article “Will 1965 be the Year? The Development History of the Biggest Lotus”, published in Motor, 10 Jun. 1965, the original known owner of this car is believed to be a J. Wheeler. This appears to actually be referring to Jack Wheeler of Clarkson, Ontario, Canada. Wheeler’s Autosport Ltd. was the authorized Lotus distributor in Eastern Canada at the time. He had this Lotus 30 on display in his shop along with several other racing Lotuses.

According to Ken Graham, reader of thegarageblog.com, the car was ordered by Competition Motors of London, Ontario, Canada through Autosport in Cooksville, Ontario, Canada. [3]Gordon Lowe, personal communication, 2003 Aug 13 This is the car that Jim Clark drove at Mosport in the Canadian Grand Prix on 26 Sep 1964.

Ken continues that Craig received the car two weeks after the Mosport race, but the car sat for two years because of financial issues and at that point, Craig is said to have sold the car (apparently to Chip Comstock?) and he and the new owner raced the car on 29 Nov 1964 at the SCCA Regional at Marlboro Motor Raceway at Upper Marlboro, Maryland, USA [4]http://www.racingsportscars.com/type/archive/Lotus/30.html Retreived 2015-Aug-15 where Graham says that Craig “got bunted off the track. [5]http://thegarageblog.com/garage/memories-craig-hill-in-lotus-30/

John Wright, a historian, wrote on www.wheels.ca that Craig became was with Chip Comstock who started up Competition Motors.  Comstock Racing was the designated factory team for Ford’s participation in the Canadian Motorsport events of road racing and rallying[6] http://www.lotus-cortina.com/photos/comstock/goldsackb.htm

“Later on, Chip convinced some London business men who were also gearheads to collaborate in the purchase of one of the first Lotus 30s. The reasoning was the Can Am was coming and one could make a lot of money with one of the products of Colin Chapman’s fertile mind. Ha! Craig told me that the car scared him. They were testing at Harewood and the steering rack came loose. They found it had only been tack welded in place!” [7]http://www.wheels.ca/news/canadian-driving-champion-craig-hill-dies/

Editors Note: As once can see, there is a little confusion over the timing of the ownership of the car.