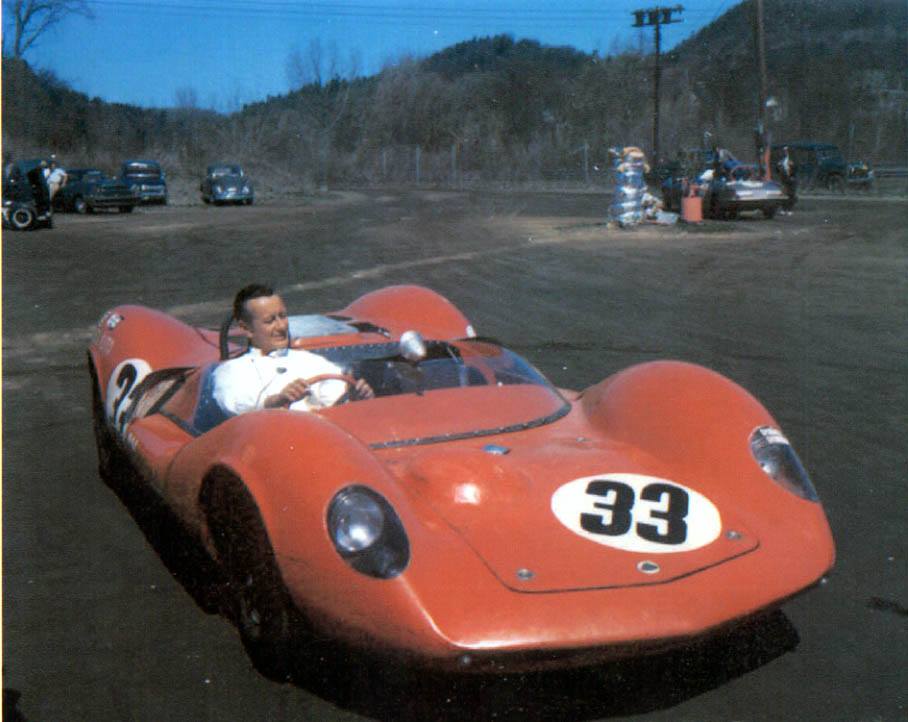 Thanks to Christopher Laws, Gerry Georgi’s stepson, for sending these photos.

Gerry raced 30/L/7 with car owner Newton Davis in the Northeast United States. When Newt was not available to drive, Gerry filled in for him. They raced this car from 1964 to 1965.

Newt Davis sitting in 30/L/7 at Lime Rock. The car was painted red and often run as #33. The car was labeled “Lotus / New York” on the drivers’ side and “Duchess Auto” on the passenger side.

For some races, the car was labeled “Lotus / New York” on the drivers’ side and “Duchess Auto” on the passenger side.

The woman in the photo is believed to be Newt’s wife. If you know who this woman is, let us know.

When this photo was taken, the engine appears pretty stock. Newt in the maroon sweater standing at the back of the car. Gerry is in the light blue driving suit wearing a baseball style cap.

Newt driving the car before the radiator and brake modifications.

Gerry is driving and Newt is in the red sweater and matching pants.

30/L/7 after the nose was modified to improve airflow through the radiator. It was said that nose lift was greatly improved after this modification. Improved ducting was added for the front brakes as well.

It appears that the radiator modification was not completed when this photo was taken. The bump-out over the pedals looks to be made of cardboard or wood, and it not painted as it is in other photos.

Rear brake ducting was added as well. These brake modifications gave the car a distinctive look that was retained for many years.

Newt driving the car at Lime Rock, which was his local track. Car numbered 33. There appears to be some issue with the engine…

This photo was printed in May 1965, so the photo was taken no later than that date. That means the modifications to the radiator air flow and the brake ducting may have been done before that time. The modifications are present in the following photo taken at the Vanderbilt Cup Race for the USRRC Bridgehampton on 23 May 1965.

Gerry drove 30/L/7 in the the Vanderbilt Cup Race for the USRRC Bridgehampton on 23 May 1965. The car number was 38, and the Entrant was Newt Davis. The car did not finish the race. WorldSportsRacingPrototypes.cz says that Gerry had an accident on Lap 42.

The was entered for the Nassau Trophy on 5 Dec. 1965. Entered as #33, the car did not arrive. Gerry was listed to be the driver.

Chris Laws added, “The Nassau speed week Dec. 1965 – Gerry drove to Florida towing a trailer with the Lotus 30 on it. We arrived at Nassau during testing, Newt blew the engine. This would show the car was a DNS (did not start). It had been rebuilt just before leaving for Florida. The spare tires were offered to A.J. Foyt in case he needed them. My Mother pulled me out of school to go on this trip with my 2 step brothers. This was my first time to a sports car race. I fell in love with the Chaparrals. I came across a black and white photo taken at Nassau at that race and in the photo is me and one of my step brothers sitting above the Firestone banner over looking the Chaparrals.”

Some of Gerry’s racing results can be found on RacingSportsCars.com